Inserting long, plastic tubes through their oesophagus to induce vomiting has been an unhealthy trend among Chinese girls for a while now, but a 22-year-old woman recently became the first to accidentally swallow her vomiting tube.

Xiao Lu, a 22-year-old girl from Guangzhou, reportedly went to a local hospital on December 3 and told doctors there that she had accidentally swallowed a drinking straw. The object was too deep to reach, so doctors ordered an upper gastrointestinal tract radiography, which revealed a long thick tube in the the woman’s oesophagus. The foreign object measured about 1.9cm-wide and 30cm-long, which made it too thick and too long for a drinking straw, so the doctor pressed the woman for answers. 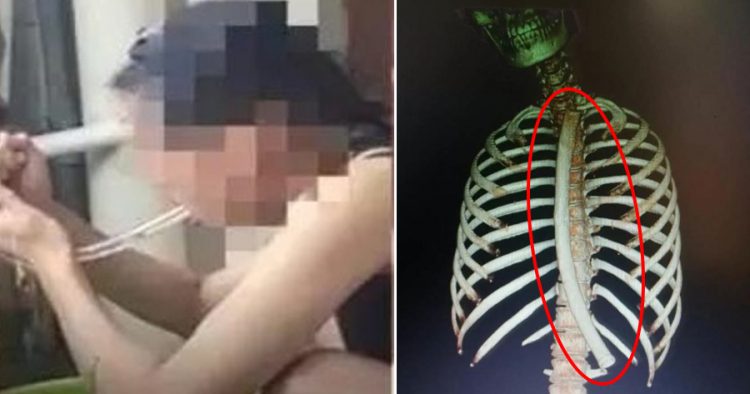 Caught with a lie, the young woman saw no point in hiding the truth anymore and told the doctor that she had bought the plastic tube online as a weight loss aid. She would insert the tube through her oesophagus to induce vomiting after eating, thus making sure that whatever she ate wasn’t assimilated. The tube worked well until one day when she accidentally swallowed the tube whole.

The x-ray showed that the bottom end of the tube reached all the way into the woman’s stomach, pressing against the stomach wall, while the other end was near her larynx. The doctor managed to safely remove the tube via laparoscopy, and later performed a gastroscopy which revealed ulcers in her stomach wall and oesophagus. 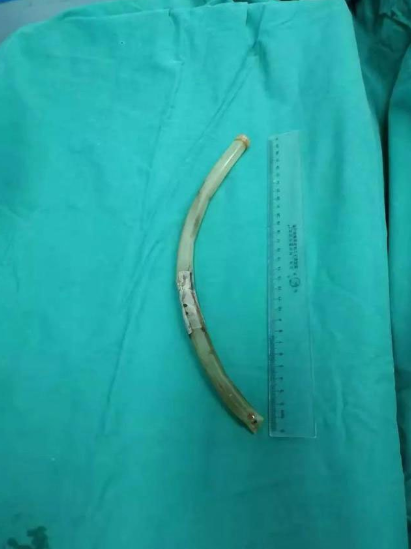 Zhang Hanyu, deputy chief doctor at the emergency department of Beijing’s Friendship Hospital, said that while controversial vomiting tubes are increasingly popular among young Chinese women looking to go to extreme lengths to lose weight, using them has its risks: gastroesophageal and pharyngeal issues, mucosal damage and even neurological problems like involuntary arm and leg movements.

The doctor mentioned that this is the first case of a ‘vomiting tube’ being accidentally swallowed.