A group of scientists from ETH Zurich and FHNW University of Applied Sciences and Arts Northwestern Switzerland recently filed a patent for a process that makes chocolates shimmer in rainbow colors without using food coloring.

The story of shimmering rainbow chocolate began on the corridors of a university building, when food scientist Patrick Rühs, materials scientist Etienne Jeoffroy and physicist Henning Galinski started chatting about chocolate during their coffee break. The main focus of their discussion is whether it would be possible to make chocolate in other colors than brown and white, and if so, how. Intrigued by the complexity of the topic, they started looking into chocolate, its properties and what makes it brown. Then they started conducting playful experiments in the kitchen of ETH University. 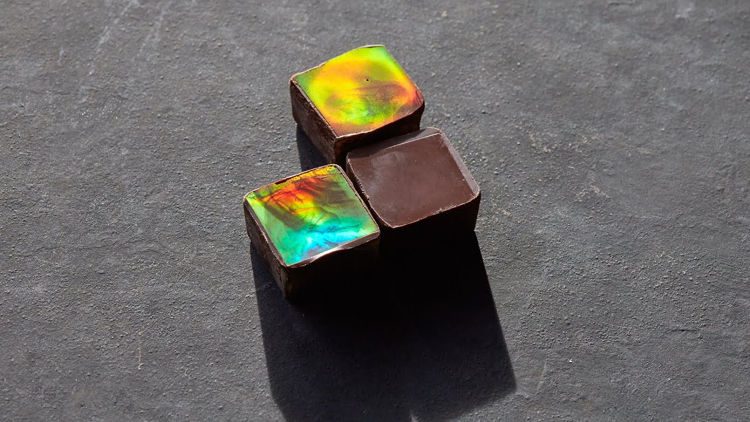 The first experiments involved edible coatings of gold and titanium oxide. Depending on the thickness of the coating, titanium would cause golden yellow or deep blue coloring to appear on brown chocolate, but the three scientists rejected this method as unpractical. The production process was deemed too complex, not too mention chocolate’s melting point of 31 degrees Celsius, which would make coating it very tricky.

After careful consideration, the researchers agreed that they needed to come up with a solution that did not involve additives. They change their approach completely, opting to create an impression on the surface of the chocolate instead of a coating. It’s at this point that they enlist the help of materials science student Anita Zingg, who happens to be testing such a technique as part of her master’s project, and they finally make a breakthrough. 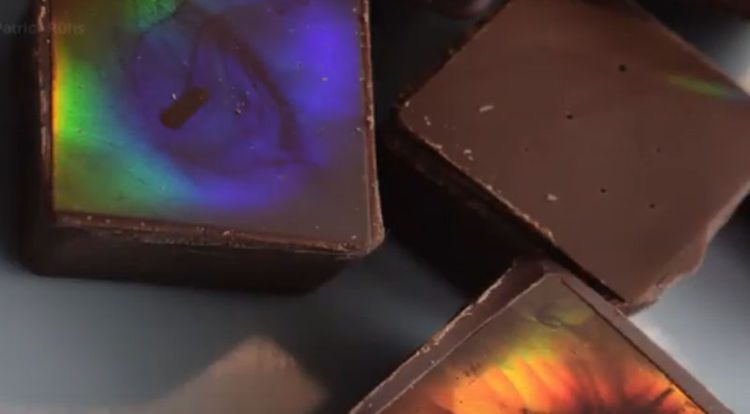 Through some trial and error, the Swiss scientists strike gold – a colourful shimmer appears on the chocolate, and after refining the process the slight shimmer turns into a glow. With the help of Per Magnus Kristiansen and Jerome Werder, two experts in surface coatings at the FHNW University of Applied Sciences and Arts Northwestern Switzerland, a mold that makes it possible to imprint more than one chocolate at a time, and the team is ready to present their solution to chocolate companies.

After filing a patent for imprinting structural colors onto chocolate, and finding solutions to scale up for industry, the scientists contacted various chocolate manufacturers (of which there are quite a few in Switzerland) and are in discussions to have their chocolate coloring solution commercially implemented soon. They plan to start a spin-off company in the near future.