For nearly three decades, Gubbio, a small medieval town at the foot of Mount Ingino in Italy’s Umbria region, has held the Guinness Record for the world’s largest Christmas tree.

In 1981, the 750-meter Christmas tree spread over the slope of Mount Ingino was lit up for the first time. Every year since, on the 7th of December (the Eve of the Immaculate Conception), the over 700 giant lights that make up the tree are turned on, and they remain active throughout the holiday season, until the day of Epiphany, on 6th January. Created in honor of the local Patron Saint Ubaldo, the Christmas tree of Mount Ingino was recognized by the Guinness Book of Records as the ‘world’s largest Christmas Tree’ in the year 1991. Since then, no one has even come close to challenging its record. 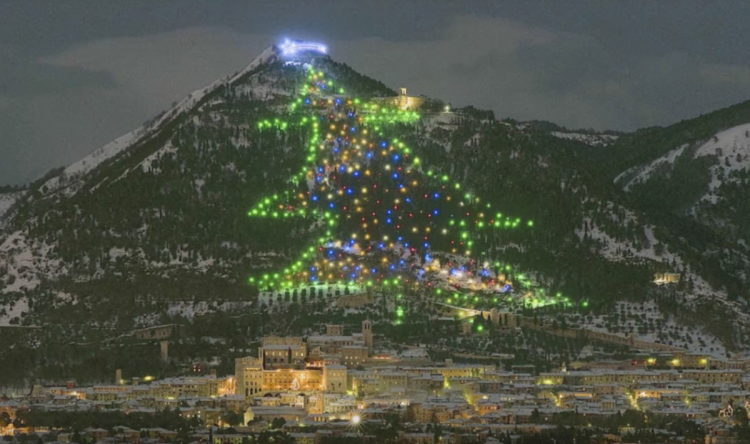 Making sure that the world’s largest Christmas is ready for its yearly spectacle is no small feet, but luckily, a group of local volunteers called the “Alberaioli” make sure the cables and thousands of lights are in working order. This year, they had to check a total of more than 8.5 kilometers of cables, and over 3,000 lights, with a power of 35 kW. The bright star at the top of the tree alone contains 1,350 lights.

Since 2010 electricity for the Gubbio Christmas tree lights has been generated by photovolatic panels.