When their 15-year-old daughter broke the rules by sneaking in boys at a sleepover party, her parents gave her a choice between handing over her phone for a month, or giving them access to her social media for two weeks. She chose the latter and the internet is so grateful for it.

Madelynn Sumpter’s social media takeover by her parents, Tawnya Ford and Larry Sumpter, began early in November with an Instagram post that announced she had chosen to hand over access to her social media for two weeks, so her follower could expect “some amazing Instagram posts, snapchats and tiktoks from her parents”, and boy did that live up to the hype. On November 11, Maddi’s dad had already began his hilarious quest to embarrass his teen daughter, by posting a selfie captioned “Felt cute. Might delete later”. But that was only the beginning, and by her dad’s third post, the teen was already begging her parents to take away her phone for a month. 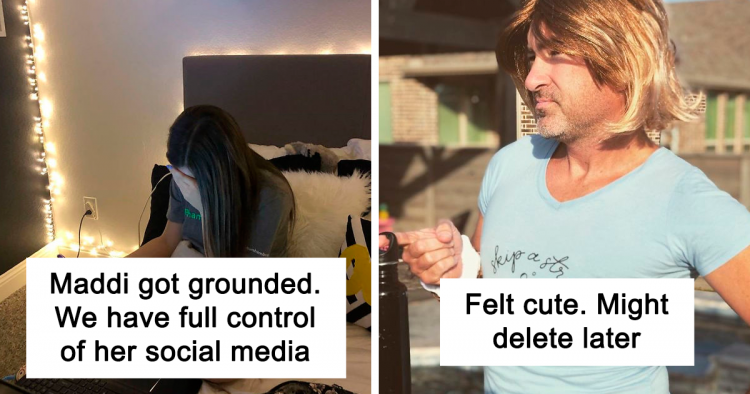 “After the first day, Madelynn was like, ‘I changed my mind, I choose the one month,’” Tawnya Ford laughingly told TODAY.com. “Larry told her, ‘No. I’m too invested. I have too many ideas. We’re sticking with the two weeks.’ He’s loving it. I think he’s gonna make his own TikTok account when this over.”

From posing in a tight top and wearing a blonde wig, to dancing around with his son-in-law in a pair of daisy dukes and a tank-top, it seemed like there was nothing the 43-year-old commercial construction manager wouldn’t do to entertain, and Maddi’s friends and social media followers were eating it up.

Over the course of two weeks, Madelynn Sumpter’s Instagram following jumped from around 2,700 to 12,700, at the time of this writing, so she should probably thank her parents for their original punishment. The only question is can she live up to dad Larry’s creative streak? She’ll have to at least try, as many of her social media followers are already asking her to “bring dad back”.

“We’re always down to embarrass our kids!” Tawnya Ford said, adding that her husband routinely picks up their kids from school dressed as a mascot and blasting country music.