Rhea Ballos, an 11-year-old student of Salvacion Elementary School in Balasan, the Philippines, has become an overnight sensation after winning three gold medals in a provincial sports event, despite not having proper running shoes.

The young athlete managed to win the 400-meter dash, the 800-meter run and the 1,500-meter run in the girls’ categories while wearing strips of bandage over her feet instead of proper running shoes. Rhea basically ran barefoot, with the thin bandage offering minimal protection against the running track, but that didn’t stop her from beating all the other girls, all of whom were wearing running shoes, and taking home the gold at the inter-school sporting event held in Iloilo, central Philippines. Photos of the girl’s makeshift shoes, complete with a hand drawn swoosh logo, and the “Nike” brand scribbled on the side quickly went viral, wining her praises from all around the world. 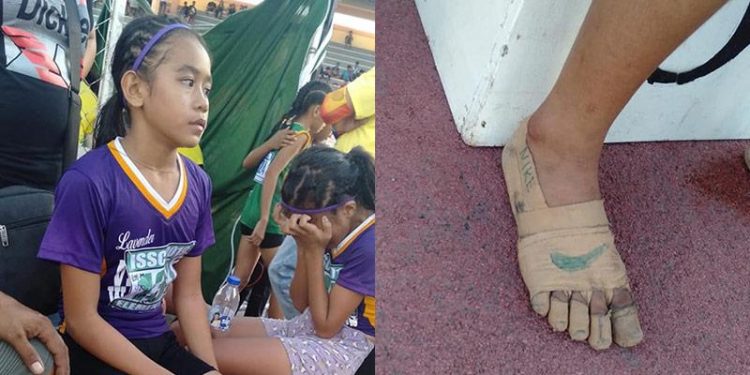 News of Rhea’s achievements and the photos of her makeshift running shoes spread like wildfire on social media, and her story was eventually picked up by news outlets around Asia. Jeff Cariaso, a retired basketball player and the coach of the Alaska Aces was so amazed by the girl’s performance that he started asking people to help him get in touch with her and her coaches. He managed to reach her and apparently put them in touch with Nike, so the whole team could receive proper footwear.

Rhea Ballos isn’t the first person to win a running race despite wearing improper footwear. Back in 2017, we wrote about María Lorena Ramírez, a native Rarámuri woman from Mexico, who won a 50 kilometer ultramarathon wearing rubber sandals and a skirt.