EpicNews
Home Funny News Wanna get away with stealing a beer-distributor’s van? Don’t drive around with...

You know how the cops are always all like, yo, lock your car doors and don’t leave the keys inside, lest you wake up and find that your vehicle got stolen?

And how they also urge the general citizenry not to take cars that don’t belong to them because that’s grand theft auto and you can do some serious time if you get caught?

This story is about people who forgot to honor both of those law-enforcement suggestions.

Sometime after closing up shop on Aug. 13, he left the store’s branded delivery van parked in front of the establishment – which comes complete with surveillance cameras. On this day, he admittedly “left the keys in the van, unlocked, overnight.”

This was obviously a mistake, but an understandable one when put into context. Normally, an employee would take the vehicle home and put it in the garage, but that employee wasn’t around on Aug. 13 and 14.

Flash-forward to around 3 a.m., Aug. 14. The cameras captured footage of “some guy walking down the street checking door handles” for easy entry. That effort led him to East Falls Beverage’s dark-blue, 2010 transit van.

“We could see him open the door, get in the van and drive off,” Kenney shared a couple weeks later of what that surveillance footage showed.

In many situations like this, the vehicles are never found, but this wasn’t a typical situation. 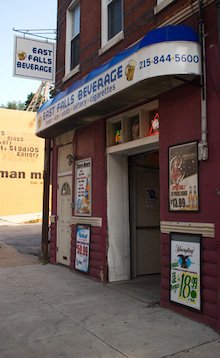 The scene of the crime.

About 20 miles to the north of East Falls Beverage in Montgomeryville, Montgomery County, an observant police officer noticed that very van one day later.

Specifically, according to the criminal complaint filed in relation to the case, a Montgomery Township police officer noticed the van in the area near County Line Road and Claremont Drive just after 1:30 a.m. on Aug. 15.

The officer turned around, followed the vehicle, stopped it, ran the registration and saw it was reported stolen out of Philadelphia.

Per the complaint, the driver – Anthony Porter, 42, of the city’s Olney section – admitted he’d taken the vehicle without permission.

“He was just driving around with a flat tire, like it was no big deal, in a branded van,” Kenney said.

If but not for that brazen stupidity, East Falls Beverage may have never seen the van again. Not that it mattered much, though, since they’ve already traded it in.

“I don’t know what he hit, but when I got it back, besides the flat tire, the suspension was all f***** up, and the ignition and gears were, too,” he said Thursday. “I just traded it in yesterday and got a new one.”

So, fear not, East Falls: You can get your beer delivered again. Also, don’t leave your keys in your unlocked cars, or steal cars for that matter.

Oh, in case you were wondering, there was no beer inside the van at the time of the theft. They’re not that careless.

Porter is charged with receiving stolen property, unauthorized use of a motor vehicle, driving while suspended, and careless driving. He’s scheduled to be arraigned on those charges in Montgomery County on Oct. 23.

Have a news tip? Let us know.