A New Jersey woman is going viral this week after a Pennywise clown doll landed in her yard — and she burned it.

Renee Jensen was in her Harrington Park, Bergen County, home when she and her boyfriend spotted an object flying in the air and then landing in her yard. When she inspected it, she realized it was a Pennywise doll — the murderous clown in Stephen King’s “It” horror novel series — adorned with cult-like markings on its forehead.

“I turned it over and I jumped back and dropped the thing and yelled for (my boyfriend),” Jensen told USA Today. “He picked it up and I was freaking out. It was creepy and it had weird … I don’t even know what the writing was. It looked culty.”

NJ.com reported that Jennsen called the cops, who were equally spooked, she said.

“They were hysterical,” Jensen said. “They wouldn’t touch it. they were totally creeped out too. It was so funny.”

Finally, she burned the doll with some newspaper kindling. And slept with a knife and the bedroom door locked, she told NJ.com. 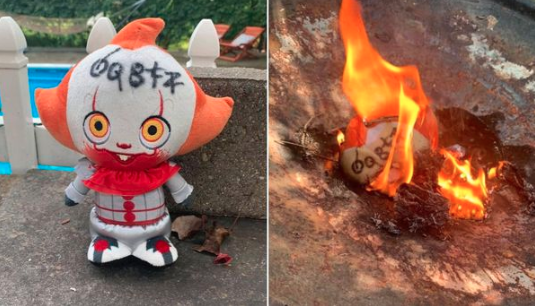 Renee Jensen, of Harrington Park, burned a Pennywise doll that floated into her yard.

The original 1986 novel “It” was made into a film in 2017, which cemented the iconic line from the novel, “We all float down here. You’ll float, too,” into the minds of a new generation of horrified children, teenagers, and evidently, adults.

The trailer for “It: Chapeter 2” was released just last month, so Jensen is speculating that’s why someone played a prank on her with the doll. The film premieres Sept. 6.

With the second installment’s upcoming release, it’s no surprise that after Jensen posted the incident to her local neighborhood Facebook page, it made national headlines.

Even Pennywise’s creator himself commented.